Is there a problem

Heifer and Young Cow Fertility – Is there a Problem? 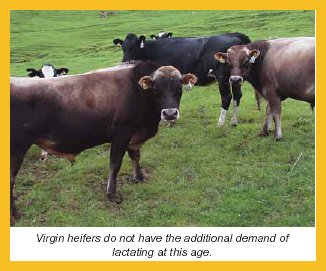 Most cows in NZ are culled from the herd because they are MT. (Empty – meaning not pregnant to calve and lactate during the subsequent season)!

Many dairy farmers accept the reason for this is because of low nutrition levels in the herd just before or during the mating season, or possibly because of some factor relating to mating management such as heat detection.

Could there be another reason? If “outcomes” are your focus, consider running an audit to verify that the substantial investments in herd improvement are actually being achieved. Perhaps your herd replacements were not sufficiently grown before they entered the herd?

For first mating heifers, much emphasis is put on the importance of reaching a specified target weight by the start of mating. It is well accepted that puberty is a function of body weight – not age, and onset of puberty is essential for reproduction. Most people interpret the importance of reaching a “mating target weight” as being critical to the resulting success of heifer mating.

This is not to say that achieving a “mating target weight” is not important. It is very important because it will likely affect subsequent target weights to be achieved. But returning to the heifer’s first mating success (or otherwise), this not likely to be related to low nutrition because in NZ the mating period comes at a time of adequate or excess supply of high quality pasture.

I have regularly observed that poorly grown heifers which are well below target weights (but have achieved puberty) will become pregnant with good conception rates because they are likely be growing at excellent weight gain per day rates during mating – indicating a positive energy balance during this time.

However, it is a very different situation for a first lactation heifer in the herd, particularly during the spring. The natural order of life for her is as follows:

If there is limited feed available for her, the order in which these factors become compromised is in the reverse order. That is;

It must also be remembered that at this age there are also teeth to change and a social structure in the herd to sort out – if she has a chance!

A fundamental fact to remember is that in New Zealand the diet our cows are offered is not ideal from the point of view of maximising dairy production. NZ cows fully fed with a total mixed ration will produce something like double our ‘normal’ milk production, so it can be argued that milk(solids) production in typical NZ conditions is compromised!

It is economic arguments that persuade us to base dairying on maximum utilisation of pasture. With most mating taking place early in the lactation and weather conditions which are unfavourable for spring pasture along with energy levels lower than ideal, it is not uncommon for supplements to be offered and/or once-a-day milking introduced to reduce lactation demand.

It is debateable whether our A.B. organisations have done us a favour in NZ by introducing genetics since the late 1980’s that are now shown to have reduced fertility rates in dairy cows under our conditions.

You should check the MT rates in your herd by Sire Group and compare the Fertility Breeding Values of those sires involved. Also check the Fertility BV’s of the sires you are currently using.

Recognising that feed away from the dairy unit is likely to be much cheaper (see article on page 4), ensure that heifers are introduced to the herd at body weights that give them the ability to cope with the demands we imposed on them.

Some farmers recognise that restricted feed availability during the spring will impact most severely on the youngest cows and manage the problem by separating these young and/or low condition cows into a separate herd and offer them more feed than the balance of the herd.

A long term solution is to not use Sires with a low BV for fertility.

MINDA is a recording service that could design a pre-formatted report from stored data to make the task of auditing more convenient.