If you’re thinking of buying or leasing a run-off, then do your sums first. 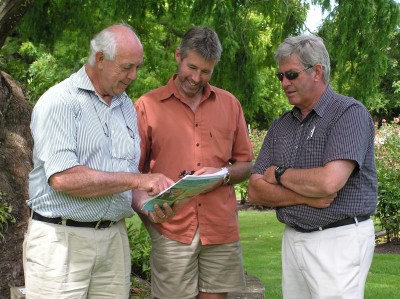 If you’re thinking of buying or leasing a run-off, then do your sums first. That’s the advice from Te Awamutu dairy farmer, Mike O’Connor, (Centre of photo) who milks 480 cows on his 145 hectare home property, plus another 8500 in equity farming partnerships based in Canterbury. In total, there are six dairy farms in Canterbury, all of which are owned by the partners, plus a beef and sheep operation in Southland.

Most farmers, says Mike O’Connor, don’t look at the real costs involved with a run-off. These might include a cost on time (“not many of us quantify our time”), running expenses, staff time spent at the run-off instead of the home farm, and depending whether it is leased or purchased, whether it’s a good use of the funds employed. In a paper presented some time ago at “Dairy Three,” Mike O’Connor concluded that farmers needed to do their numbers before securing a run-off – which was an observation, he said, based on personal experience. “I was involved in having a small, leased farm which I ran in conjunction with my business,” he explained. “I felt at the time that it gave me the opportunity of controlling certain aspects of the off-farm operation, and that’s what it did. Until I was ready to re-new the lease, I didn’t particularly factor in exactly what it cost me in time, fuel and energy, along with missed opportunities.”

A second foray into a leased run-off property, however, was done on a more business-like footing. Along with two other farmers, Mike O’Connor leased a 250 hectare property to support their Waikato operations. It is run as a stand-alone business, employs a manager, and is used to graze heifers and grow maize.

“So we now have a pretty good idea as to the true costs, including management and everything associated with an operation such as this and it is quite plain to me that we are not going to get rich doing it.”

“The thing which does make money is normally the winter grazing and the selling of maize. We grow about 65 hectares of maize each year. It’s run well, and carries about 550 rising one-year-olds through to rising two-year-olds, and about 450 weaners through to yearlings, as well as about 50 bulls.”

“I did prepare a budget for our operation and it showed it to be a ‘break even’ venture. I guess the conclusion from the paper I presented was the fact that we had control. That presentation was quite an inter-active session, and what was found was that many of the people present were willing to have some cost involved so long as they had control. They felt that control was worth a certain amount, but I’m sure that a lot of those present didn’t actually factor in how much that cost them.”

In setting up their own run-off operation, Mike O’Connor and his partners invested in the order of $200,000 to upgrade existing facilities.

“We re-fenced the whole property and put in a new water reticulation system. Cattle yards were built and capital fertiliser was applied. We have had the property for five years, and given another three or four we might recoup our capital.”

“What I am saying is that it’s not a great payer, but we do have control. Weaners have to be a certain weight before they go on, and they are weighed regularly. It is commercially run in relation to wintering or grazing rates. We are not doing ourselves any favours and we are not making it easy on the property either.”

“Many people have made good money on run-offs, but this has had more to do with capital gain and things like that, than farming. That’s fine. To me, there are no rules – there is no right and wrong.”

“I have friends who have done exactly this and have done very well out of it. In the paper I presented, I wasn’t promoting any one outcome. All I was really saying was understand what you are doing before you do it. See where you are going to land before you leap!”

Mike O’Connor makes no secret of the fact, that he and his partners intend to expand their business operations still further.

“We are looking off-shore a little, but in New Zealand we are looking for what we think are opportunities, and we are still aiming to buy more land,” he says.

“We may develop more dairies or sheep and beef properties, or invest in existing dairies which need a leg up. We are looking right across the spectrum of farming really.”

Opportunities in farming, it is claimed, still exist.

“But it is a hell of a lot harder to find them now than it was, although when you turn the clock back, I don’t believe that we have ever bought a cheap farm. They have always been expensive.”

“The opportunities have never been particularly easy to see although hindsight would suggest that we must have had blinkers on to say that!”

To buy or not to buy – that is the question!

There are probably as many views on the merits of owning or leasing farm run-offs as there are people to operate them, but Mike O’Connor has come up with his own definition:

You run to run-offs and you run back home from them. They just keep you running really – that’s why they are called run-offs!