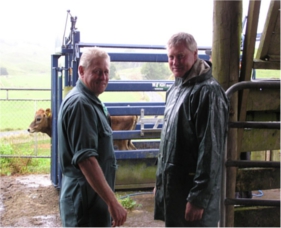 John, who farms in partnership with his brother, Wayne, says while stocking rates have increased resulting in increased production per hectare, Jersey breed performance, in his opinion, has done little more than “tread water” over the last 20 years.

John and Wayne Foreman have three farms in the Lepperton-Inglewood area, running 320 cows on the 100 hectare home farm; 140-150 heifers on a second 45 hectare property, and 150 mature cows on a 48 hectare third farm.

“Younger farmers of today think their cattle are marvellous, yet in the old days we milked cows until they were 20 years old, and we didn’t have the drugs that we do today to keep them alive,” says John.

“Admittedly we have higher stocking rates now than we did then, but you could walk through a paddock and pick the Red Lindens, Choice Texans, and Folly Sultans just by looking at them.

“But the point is, our cows were doing 400 kg milksolids 20 years ago, and we are still doing the same today. We haven’t gone anywhere!”

Unlike Jersey cattle, says John, Holstein-Friesian cattle have made “enormous strides” in conformation.

Perhaps the answer as to why Jerseys have made little advancement compared to their Holstein-Friesian counterparts, he says, can be traced to the starting point of the artificial breeding programmes for the respective breeds.

From the outset, there was a lot of room for improvement within the Holstein-Friesian breed, especially in terms of conformation and udders, he says.

Conversely, Jersey Ab breeding commenced at a high starting point, and some of the early sires used have been hard to improve upon.

This led him to try many of the Jersey breed’s leading pedigree bulls, after which he switched to American sires in an effort to improve protein production and to add a little more size to his herd.

These days he is tied in to no one organisation, and still conscious of type, he has selected bulls from World Wide Sires, Ambreed, Semex and the Livestock Improvement Corporation.

BW and PW, which were once considered a “non event” are now key criteria in the selection process.

“It’s all bank-driven now, and banks demand high BWs and PWs. The emphasis on type hasn’t changed however, we are very particular about udders, feet, legs and temperament. We have to be fussy about temperament, because we introduce 140 heifers into our herd every year.”

Ian Wickham, managing director of New Zealand Grazing, plays a key role in the preparation of those heifers.

He has had a long association with John Foreman, which began when he trained the latter as an Ab technician for Ambreed. When he commenced operations with New Zealand Grazing in 1988, the Foreman brothers began supplying him with 100-120 weaners annually.

They arrive on Ian’s farm at Kaimata at four to five months of age, after which 50 are returned to the Foremans as yearlings. The balance are grazed on the Wickham property before being returned as in-calf two-year-old heifers.

“One thing I hate, once our calves have been weaned, is trying to keep them in mobs on a dairy farm. They dive under fences and everything!

“I trust Ian to look after my stock. I have had problems, and Ian has had problems, but I’ve always maintained that there is no problem if you fix it.”

One of those problems was Rotavirus, a condition common among calves in Taranaki, which is often overlooked or misdiagnosed simply as scours. If untreated, the result is frequently death.

In order to prevent it, cows must be injected at a given period before calving. This ensures that the cow’s colostrum will contain the antibodies necessary to operate the immune system in the new born calf.

At around $6.20 per shot, that vaccine doesn’t come cheaply, but John has found a way to overcome this.

“I inject only those cows which are carrying Ab calves,” he says. All cows carrying Ab calves get injected for Rotavirus. I store first milk in a separate container, and every calf born which has not come from an injected cow, such as the progeny of mop-up bulls, receives two litres of this.”

Dairy farmers can breed for good temperament, but the way young stock are handled can also influence the way they behave in the farm dairy when they are later introduced to the milking herd.

For this reason, Irene Clinch, Ian Wickham’s farm manager for the last five years, can claim much of the credit for the ease with which John Foreman’s two-year-old heifers slip into the routine of milking.

Irene has lived in the Kaimata area for most of her life, and in addition to managing the Wickham property, she and her husband, Bob, have their own 161 hectare farm across the road.

The first thing to getting weaner cattle used to, she says, are dogs, and the education process has got to be done slowly.

“The weaners are rarely used to dogs, and it takes time. A heading dog is best at the start,” she says.

Regular handling of the young stock through drenching and weighing, says Irene, is part of the key to producing a well adjusted heifer with good temperament.

“But they are also bred for temperament,” she adds modestly. 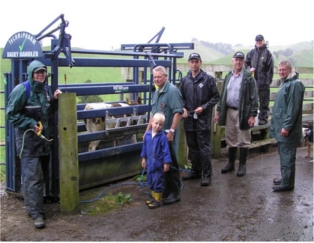