A scientific study has turned conventional wisdom related to worm control on its head!

The study was initiated on ‘Totara Mahanga’, the Inglewood property of New Zealand Grazing Company managing director, Ian Wickham, last autumn. It sought to determine the extent of worm resistance among dairy heifers given a range of treatments, and as a result, the best means of combating worm resistance.

Conclusions reached as a result of the study were:

“Given Ian Wickham’s position as managing director of the New Zealand Grazing Company, it was felt that we should ascertain the position related to drench resistance on his home farm,” says the report.

“Almost exclusive use of white drenches had been made on Ian’s farm for a number of years. Conveniently, among his grazing clients in the autumn of 2006, Ian had one with a mob of 110 heifers which were suitable for a study to compare different drench families with each other, and with no drench.”

Four weeks after the heifers had last been drenched, faecal worm egg counts were performed on dung pat samples. These were taken weekly – and the trial was delayed – until a faecal egg count of 173 eggs per gram was reached.

Seven groups of heifers, with 15 animals in each group, were used in the evaluation. One group – the control group – was not drenched at all. Others were dosed according to their liveweights with white drench (benzimidazole), clear drench (levamisole), white/clear combination drench, endectocide (macrocyclic lactone), half dose endectocide, and endectocide/levamisole combinations.

Two weeks later, all test animals were individually dung sampled. Faecal worm egg counts were checked and any animals with less than 95% reduction in the faecal egg count were regarded as showing resistance to the drench.

They were submitted for larval culture to ascertain the species of resistant worms. “Drug resistance in the different gastrointestinal worm species were shown,” says the report.

“The levamisole treated group had good weight gains in spite of showing Ostertagia resistance, which was not surprising at that time of the year when Ostertagia are less significant.”

“The benzimidazole treated group had the poorest weight gains, which were poorer than the control group.”

“The highest weight gains were recorded in the benzimidazole/levamisole treated combination group.” 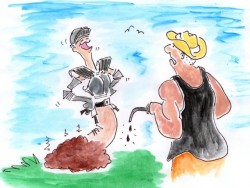 Drench resistance is a fact – not a fiction

The study gives cause for worry, in that the results indicate a rapidly shrinking arsenal of worm drenches at the disposal of farmers, says Benn and Spencer.

“We must do all that we can to conserve what we have left,” they urge.

“It would seem logical that resistance to white drench has occurred through persistent use on the home farm, whilst that to clear drench and endectocides may well have been brought on to the farm by worm-infested heifers.”

“In conclusion, this drench test clearly illustrates the widely held view that drench resistance is a fact, not a fiction, and unfortunately will not go away.”