Grow grass to be eaten – not hoofed into the mud!

In looking at the merits of grazing stock off the home farm over the winter period, attention is usually largely centered around the economic analysis, and the financial gains that can be made as a result of the extra productive stock than can be carried.

Generally little, if any, attention is given to the gains (or avoidance of losses) that can also be made, in more indirect ways, by capturing the possible beneficial contribution to both stock and pasture management.

Traditionally, even when recognised, these benefits tend to have been considerably undervalued – with winter pugging damage being widely acceptable as essentially unavoidable, and considered to be a problem that can largely cure itself through natural recovery and re-growth – with maybe a bit of assistance from some over-sowing.

However there are pleasing signs that farmers are now generally becoming much more aware of the severity of the damaging effects of pasture pugging, both immediate, medium and long term. This is evidenced by the fact that during winter, 10 -15 years ago, the country landscape would be dominated by frequent blocks and strips of black, pugged, mud strewn pasture. While it could not be said that these have disappeared in today’s winter, the frequency of occurrence is certainly far less – even under continually wet conditions, the likes of which we experienced this year. 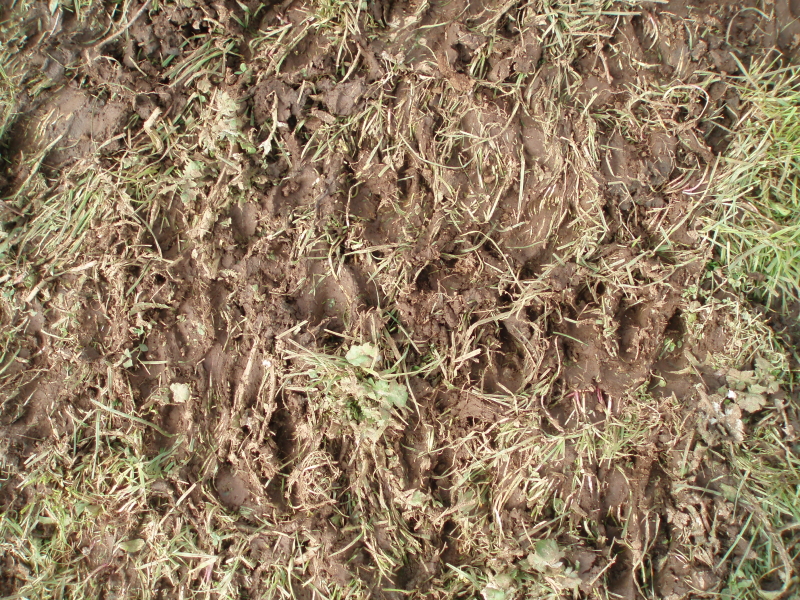 Quite probably, the beginnings of this much greater appreciation of the damaging effects of pugging came from some work done in the late 1980’s at the old Taranaki Research Station by Norm Thomson. After an extremely wet July (3 weeks with rain every day) Cows on the station lost 30 kg liveweight – despite being allocated feed at 1.3 times their maintenance requirements.

Conventional wisdom at the time would have had it that this was merely the result of the increased energy requirements due to the cold wet conditions pushing feed demand up above that allocated. However Norm thought that the gap was much too wide to be fully explained by this factor alone – and so started to do some measurements on the amount of pasture trodden into the ground under wet conditions.

The results were sobering to say the least. At the extreme, after a night of cold, wet southerly weather, 80% of the pasture originally considered available, was collected from below the ground. Even on pastures which would be considered to be only mildly pugged, Norm found 20 – 30% of the original pasture underground. (This was defined as grass leaves 4 – 10 cm in length and relatively undamaged – located 2 – 6 cm below the soil surface.)

However, while this is bad, the problem certainly does not stop there. In the medium term the ill effects of the pugging damage can be even more significant, and unfortunately, also much more subtle, and so thus less likely to be fully, and correctly attributed. This is all the result of the pattern of recovery and regrowth of the pugged pastures. While the pugging will result in some pasture plants being completely destroyed, and others being severely damaged, there will also be a proportion surviving relatively unscathed – and this proportion can appear quite high when pugging damage appears to be only moderate.

Thus the undamaged grasses can come away relatively quickly, so that before very long, looking from the race, the paddock gives the appearance of good recovery – this being judged by the length of the pasture. This is a big trap for the unwary, because while those plants that are there are healthy and productive, they are only the survivors, so they are sparse. The pugging will have left a lot of bare ground, with any plant growth at all on this being largely weeds.

The paddocks lack density, and there will just not be the cover and hence dry matter present that there appears to be.

While this is problem in itself, it is unfortunately, especially for paddocks damaged in late June/July, greatly exacerbated by the timing factor. These paddocks will be generally expected to have their next grazing some time in September. This is a time when the bulk of the herd will have calved, and cows will be rapidly increasing their milk yields. Most critically, it is thus the time that cows need maximum intakes of high quality feed, if they are to achieve their full potential production – both immediate and seasonal.

That the feed may not be there to the extent the rate of growth would indicate it should be, is a problem, but if the farmer proceeds on the basis of the optical illusion that it is in fact actually

there, it then becomes a tragedy.

The amount of recovery towards full potential pasture productivity by the next, and subsequent grazings will be dependant on many factors, but by far predominantly will be the degree of severity of the original pugging damage.

Research has shown that under severe pugging damage it will take 3 years for pastures to completely recover to full productivity. This is the situation where the soil structure and aeration has been severely damaged, if not completely destroyed by the heavy treading. Where this extreme pugging has occurred some form of aeration or cultivation of the soil would be definitely indicated, as this will greatly increase the speed of rehabilitation.