BVD (bovine viral diarrhoea) virus can cause significant damage to cattle health, fertility and productivity. Generally BVD infection of a healthy cattle beast has little impact except during pregnancy. If a pregnant cow becomes infected, BVD may result in repeat breeding, abortions, stillbirths or deformed calves. BVD infection during the first half of pregnancy may also result in the birth of live calves that remain persistently infected (PI) with BVD virus throughout their lives.

These PI calves usually have poor immunity and are often ill-thrifty. They are prone to mucosal disease – a highly virulent and fatal form of BVD. However, a significant proportion of PI calves appear as normal, healthy animals.

Besides the impact of spreading vast amounts of virus to susceptible cattle, it is more difficult to quantify the impact of PI status on the health of these apparently normal cattle.

We had the opportunity to study the effects of ‘being a PI’ in a trial dairy herd made up of calves purchased from over 300 herds.

Retrospective testing revealed that 12 of 904 reared heifers were persistently infected (PI status) with BVD although they appeared to be normal and “healthy”.

Five of the PIs were obtained from a single herd with a BVD outbreak. Genetically, the heifers were closely related with similar ancestry breeding values for liveweight and production. 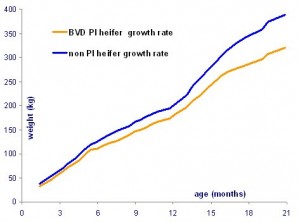 At 3 weeks, the PIs weighed on average 3½ kg less than the remaining herd mates.

By 21 months the difference between the surviving heifers had increased to 68 kg with average PI weights 17% lower than normal heifers.

Two PIs died at 15-16 months– one of bloat complications, the other with mucosal disease. Another PI heifer was culled after aborting (and ill-thrift) at 20 months. Several of the PI animals suffered bouts of pneumonia; recurrent mastitis and other infections were common.

Figure 2 (Right) Survival curve, demonstrating the proportion of PI versus normal cattle surviving to a given age (until 4 years)

Three PI heifers were culled or died suddenly after illness. The remaining nine calved and entered the milking herd. A single PI cow (8%) remains alive at this stage (after 4-5 years), having survived two bouts of pneumonia. In contrast, 71% of the normal herd mates are still milking.

Because the herd was involved in an unrelated trial, no culling was carried out for low production. PIs were 13 times as likely to die unexpectedly of severe illness than normal cows. They were also 17 times more likely to be culled for unresolved mastitis complications than the remaining cows. 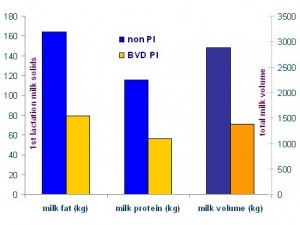 Based on ancestry breeding values the average milk production from the PI individuals should be equivalent to the nonPI herd mates. However, first lactation milk-fat, protein and volume output were massively reduced in BVD PIs. Milk solids production was essentially halved.

Five PI heifer calves were purchased from a single herd, suggesting that the herd of origin had experienced a BVD outbreak during or after mating. Using an untested PI bull in a susceptible herd is a recipe for disaster and may result in abortion storms and BVD PI calf crops. It is therefore imperative that bulls (and other cattle) be tested for BVD virus before they enter a herd especially after mating.

Growth rates and general health of these ‘normal’ PI heifers were clearly compromised. First lactation milk production was halved as a result of persistent BVDv infection. Poor immune function means these animals are very susceptible to infections including pneumonia. Survival of the PIs is also several years shortened, although these 12 PI cows produced 10 calves in total. Since all PI offspring will also be persistently infected with BVD virus, they continue to disseminate the virus.