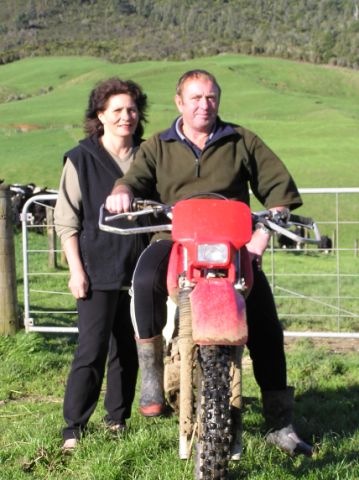 If there is one essential skill for professional graziers, then it is the ability to spot potential problems with heifers before they occur.

It is usually too late when it comes to a weigh day which indicates that a particular line of heifers are not doing well.

Tom Mackenzie and his wife, Chalmahs, have been graziers for the New Zealand Grazing Company since buying the Hikuai farm in 1990. Their entry into the industry was a baptism of fire, as Tom vividly recalls: “We were asked by the New Zealand Grazing Company if we would graze their heifers before we actually bought the place. About 300 dairy heifers arrived here either the day before we took over, or on the actual day! It was a bit of a shock to the system having to organise this on a farm which we didn’t even know!” “A number of the paddocks were of 40 hectares, and the heifers seemed to take great delight in finding tomos to fall into, which caused a bit of a problem. There was no electric fencing other than some subdivision with a four wire electric fence inside the bigger paddocks. One of our first jobs was to put electric feedout wires along the tops of the fences, and then we were able to get electricity to wherever we wanted it. It was quite a big job.”

These days, the Mackenzies, who operate the farm by themselves, have the system fine-tuned, and heifers falling into tomos which have long since been filled in, is just a distant memory.

Stock comprise of the Mackenzies’ own sheep and beef (1000 Romney breeding ewes, replacements and 50 beef breeding cows), plus 500-600 heifers, most of which are supplied by the New Zealand Grazing Company and are carried for between 12 and 18 months.

The ewes and breeding cows are used pretty much as a tool of management for cleaning up paddocks after the dairy heifers. They are also grazed in some of the steeper areas which the heifers are not given access to.

Tom and Chalmahs are meticulous in the handling of stock placed in their care. “One of the things which I have learned over the years, is that with a lot of young stock coming on, you can develop a worm burden problem,” he says. “There are a lot of things which they seem to get, and you have to pick up any potential problem before it happens.”

“When the yearlings arrive on May 1, we drench them with either an injection or a pour on. They all get cobalt, selenium and a copper bullet. We make sure that it is done here by ourselves. I don’t like the owners or someone else doing it, because if I do it myself, I know it’s done.”

“We are very strict with our drenching, especially for the first six months. If it is an oral drench, then they get it every month. If it is an injection which is longer acting, we can let it get out to six or seven weeks.”

Winter is not an easy time in which to grow cattle, but that’s the expectation when yearling heifers arrive on May 1st. To accommodate them, as much feed as possible is locked up in the autumn. Additionally 300-400 wrapped bales of silage and about 100 large round hay bales are made annually, to be fed out over winter. About $10,000 is spent annually on making the supplements.

BVD, rearing history, and breed differences can all be the source of problems within a particular line of heifers, and graziers need to be on top of this, warns Tom.

“For example, Jerseys won’t perform as well as Friesians or crossbreds on certain types of grass,” he says.

“If the heifers are on a part of the farm which has more mature grass, very often the Jerseys won’t do as well on it. We have struck that before when we thought that we were feeding the heifers really well, only to find that the grass was too mature for certain types of cattle.”

The fact that through the New Zealand Grazing Company, some owners have sent their heifers to the Mackenzies since they commenced operations in 1990, says much for their skills as graziers. There is a close relationship, too, with company sales and service manager, Graeme Heappey.

“Graeme generally calls in quite regularly,” says Tom. “He is very experienced, and he doesn’t have to drive very far into the farm to see how things are going!”