Three generations of the Montgomery family have farmed Jersey cattle on the 63 hectare property in the Mititai region, where today, Barry and wife Mary run their 140 cow Rivermere Jersey Stud.

The milking area at Rivermere comprises 43 hectares of dairy flats, with the balance of the land being used to rear young stock and winter on.

“Ours is a fairly intensive operation – we use the farm as a milking platform, and graze off our heifers in the winter,” says Barry.

“The dairy flats fall away towards the river (the Northern Wairoa), so there is reasonable drainage. However, on this sort of country it’s vitally important to protect the pasture through the winter months. Over this period we have to be prepared to move our herd very quickly to avoid pugging. If any major damage is avoided, it’s good strong country which delivers in terms of production, but if it’s knocked around, it takes a lot to bring it back.” 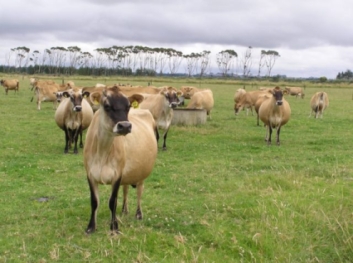 Some solid production figures serve as ample evidence of  Barry and Mary’s abilities in handling stock and getting the best from what can, at times, be a challenging property.

It hardly surprises then that Barry and Mary have been regular recipients of the Jersey New Zealand per hectare award for the Northland area.

This year, production is 15% ahead of last year, albeit with the assistance of a measure of palm kernel extract and some grass silage, and a record season is anticipated.

While the Rivermere Stud was registered in 1936, in the time of Barry’s late grandfather, pedigree cattle from the property bore the stud prefix prior to this date, after being registered as individuals with the Jersey Association.

The Rivermere herd has a very strong Big Hollow base, with bulls such as Big Hollow Bohemian and Big Hollow Jesters Barry, among others, stamping their mark on their daughters in terms of type, conformation and production capability.

Traits other than production

Barry Montgomery, who is a TOP (traits other than production) inspector for the      Livestock Improvement Corporation as well as a classifier for Jersey New Zealand, has very definite ideas as to what type of animal that he is breeding for.

“I want high-performing cattle which have the conformation to take them through a full lifetime. I don’t compromise on that,” he says.

“Longevity is important, and I am at odds with the Livestock Improvement Corporation and its quick replacement policy. I have challenged it on many occasions.”

“I believe that we miss the genetic potential of a lot of our cows because the cattle don’t go the distance. The most productive years of a cow’s life are at four, five, six, seven and eight years. With the LIC policy, cattle milk, on average, only three and a quarter lactations.”

“At Rivermere, at 3.4 cows per hectare on what is essentially an all grass system, cows have to perform.”

In a bid to maximise returns from its 43 hectares, the annual sale of heifers makes a sizeable contribution to the overall income of the stud.

In the early winter of 1995, Barry approached Ken McIntosh, the then northern farm sales and service manager for the New Zealand Grazing Company, and asked whether he could find grazing for a line of heifers.

“Luckily, because it was becoming a difficult winter throughout the North, Ken was able to oblige me,” recalls Barry.

“We have been with the grazing company ever since.”

“We had previously tried to carry all of our heifers through the winter, and then quit a line of them in the spring. We had found it increasingly difficult to get them through the winter in the condition we wanted them in.

“With the New Zealand Grazing Company, our heifers calves were able to leave the farm on May 1, and return as in-calf rising two-year-olds 12 months later. They are well grown, and there is a ready market for them.”

With a view to adding extra value, the Rivermere heifers are also artificially mated on the grazier’s property, in preference to being run with one of the New Zealand Grazing Company’s Jersey bulls.

“This is done at extra cost to us, but it does add value to the line of heifers which we offer for sale,” says Barry.

For pedigree cattle breeders, the show ring serves as the shop window to the stud. As a young man, Barry once enjoyed showing cattle alongside his father, but after taking over the farm on his own account and further developing it, coupled with the responsibilities of raising a young family, he gave the show ring a miss for many years.

“But in recent years, Mary and I have again developed a show team…and last year was our biggest push in that area, and we did very well” says Ken.