In the Hauraki Gulf, the old and the new lay almost side-by-side

Being at least 20 million years of age, Motutapu, meaning “sacred island,” is of the Jurassic period and is New Zealand’s oldest land mass.

Rangitoto to the southeast, which was formed by a series of volcanic eruptions a mere 700 years ago, is among this country’s youngest land masses.Yet despite the age difference, there is a strong link between the two, for in the series of eruptions which formed Rangitoto, its neighbour, Motutapu was showered in heavy layers of volcanic ash.

Maori settlement of Motutapu predates those dramatic volcanic eruptions. In fact the footprints of humans and a dog have been preserved in a layer of volcanic ash.Additionally, there have been more than 300 Maori archaeological sites recorded on the island, including pa sites, storage pits and stone working sites.European settlement of Motutapu did not occur until 1840, when Maori owners sold part of the island.

In 1857, Auckland businessman and politician, Robert Graham, gained title to the island, and converted large areas of it into pasture.

In 1869, a Scottish farming family, the Reid brothers bought the island and established homesteads at Home Bay (where the Restoration Trust has just rebuilt the wharf) and Emu Bay.The final resting place of James Reid and his wife, Eliza, are marked by their graves on a steep hill overlooking their original homestead at Home Bay. 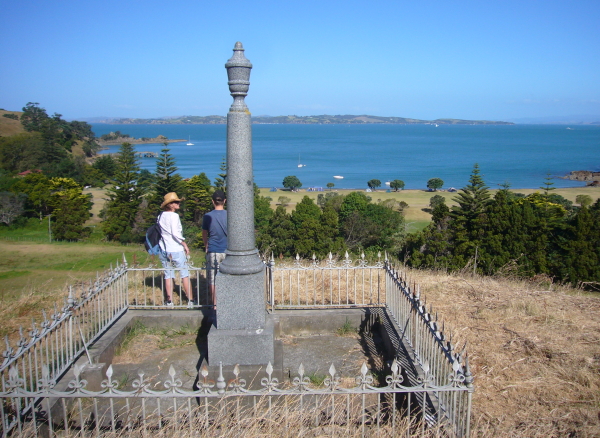 The Reids promoted Motutapu as a popular picnic destination, and it says much for their entrepreneurial flair that at one such picnic in the early 1900’s, no fewer than 14,000 people were ferried to the island over a single weekend. This at a time when Auckland’s population was a mere 100,000!

With the Japanese cutting a swathe through the Pacific in the early years of World War 11, Motutapu Island, because of its strategic location, was acquired by the New Zealand Government for defence purposes. In 1936 a gun battery including three gun emplacements were built on the island, and throughout the war which followed, heavy guns capable of firing 30 kilometres out to sea, were trained on the Hauraki Gulf.

At peak during this period, up to 800 men and women were stationed on Motutapu ready to mount a defence against any invading force arriving either by sea or by air.