Genetic improvement results from the use of “above-average” animals as parents of the next generation. This seems simple enough on the face of it, but involves a number of complex issues. First, it requires defining the attributes that determine what we mean by above average. This would not be an issue if we were selecting for a single trait, but is a complex task when our breeding goal simultaneously includes;

This list of characteristics we wish to change, along with their relative emphasis, is known as the breeding objective. Second, given an established objective, we need to determine which particular animals are above–average, from the perspective of genetic merit rather than individual performance. In that context, it is worthwhile thinking of each animal as being no more than an envelope containing genes that can be passed on to the next generation. We are not interested in the appearance of the envelope itself, as that is not ever passed on; only a half-sample of the DNA it contains is transmitted to offspring.

Although an above-average collection of DNA will generally result in a better looking envelope, there is no guarantee that this will be the case. This is because the creation of the envelope or phenotype involves a complex process over-and-above the DNA template it is based on. This is no different from the construction of a house or a cow shed from an architectural plan.

If the foundation is not well implemented, the building itself will not perform as well as would be expected from the plan.

Conversely, a good builder can produce a better foundation than is explicitly implied in a draughtsman’s plan. Differences in performance between cows in the same herd have more to do with the interpretation of their DNA during the course of each cow’s development than they have to do with the DNA sequences themselves.

For this reason, individual superiority relative to herdmates is not as informative at determining genetic merit as is knowledge of parental and offspring superiority.

There are two emerging technologies that will eventually change our current state of affairs, reducing our reliance on progeny testing and facilitating more accurate assessment of both genetic merit and phenotypic performance at a younger age than is currently possible.

The first of these involves a variety of sequencing technologies that allow direct inspection of some or all of an individual’s DNA.

Not so long ago DNA sequence could only be inferred by breaking it into lumps and crudely measuring the size of each piece. Nowadays, it is easy to inspect particular sections of DNA.

The problem is that we still do not know enough about which particular sections are the most worthwhile to inspect. In the meantime, technology is rapidly advancing to allow much larger sections to be simultaneously inspected at no more cost than used to be required for a single test.

This is equivalent to testing the strength of the foundation, rather than guessing its likely strength from the plan. This has the advantage of accounting for much more variation in performance than could be assessed from the DNA sequence alone.

The problem is that there are many different tissues (eg fat, mammary gland, blood, liver) that could be tested, at many different stages of life (at or before birth, pre or post- puberty) and the critical tissues and stages are not yet known. It may be that animals will need to be challenged in some way, in order to provide informative tests.

These areas are the subject of enormous research initiatives on an international basis, primarily directed at understanding and improving aspects of human health. The challenge for New Zealand is to leverage such publicly available offshore findings and research their application to our own dairy industry.

This will not be cheap, nor will it deliver overnight. Livestock Improvement Corporation and Fonterra’s Via Lactia are both active partners with international recognition for their leadership in these areas of endeavour. 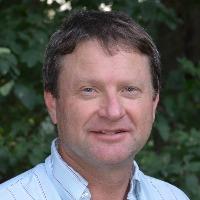 Dorian was born in Wellington and graduated with a BAgrSc(Hons) degree from Massey University in 1982.

Following graduation he worked for several years at Massey University as a Research Officer studying mixed model applications for sheep and pig improvement. In 1985 he undertook a PhD in Animal Breeding at Cornell University in Upstate New York.

He returned to Massey University in 1988, to undertake teaching and research in animal breeding and genetics, with a particular focus on industry improvement programmes.

In 1995 he was the foundation appointment to an industry Chair named in honour of Professor A.L. Rae and appointed as a Professor at Colorado State University from Fall 2002.

Dorian has been integrally involved in the development and implementation of national animal evaluation programs, performance recording databases and breeding schemes. He has worked in the design of experiments to detect quantitative trait loci (QTL) and to exploit them in breeding programs.

Dorian works well with other researchers and equally enjoys working with enthusiastic producer and industry groups that seek to include animal breeding approaches in the attainment of their ranch business goals.

His positions include formal consultancy contracts with AgResearch and Livestock Improvement Corporation.