A2 Milk: should farmers convert?

For the last four years I have been trying to convince the NZ dairy industry that we should be converting our herds to produce A2 milk. But it has been an uphill battle.

The mainstream industry has claimed that it is a non issue. And this stance was supported by the NZ Food Safety Authority’s claim that Professor Boyd Swinburn’s 2004 Report to them on A1 and A2 milk said that all milk was safe.

In fact Professor Swinburn said nothing of the sort. What his Lay Summary did say, amongst other things, was that ‘changing dairy herds to more A2 producing cows may significantly improve human health’.

However, the NZFSA successfully suppressed the publication of this Lay Summary until I sought and obtained its release under the Official Information Act.

There is indisputable evidence that A1 beta-casein releases on digestion a protein fragment called beta-casomorphin7 or BCM7 for short. I call it the ‘milk devil’. It is produced by many of our cows of European origin. The level is considerably higher in Friesian cows than Jersey cows. Asian and African cows do not produce the milk devil. Nor do buffalo, yaks, camels, and nearly all sheep. Nor do humans. We humans only produce ‘A2’! 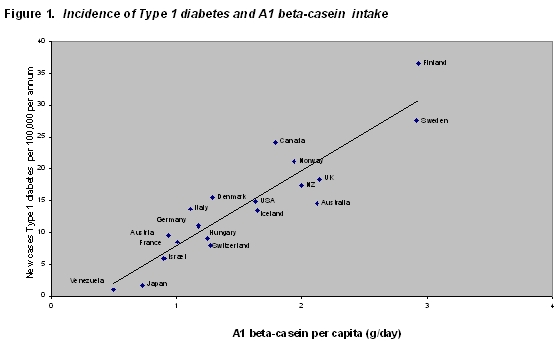 We know that many autistic people and also many schizophrenics excrete the milk devil in their urine and that this can only be coming from milk. (For many of us the milk devil molecule is too big to get from the gut to the blood where it does its damage, but with some people it can get through.)

All of this information is in the published scientific literature. And we also know that there are many people who are intolerant of ordinary milk (it gives them wind and diarrhoea) but they can tolerate A2 milk.

Why, therefore, has this all been a secret?   In fact to some of us it has not been a secret. But it is true that in the past the various bits of the story have not been successfully brought together in a way that was convincing to average citizens. And A2 Corporation has not been allowed under consumer law to say these things in their advertising. In the David and Goliath battle between A2 Corporation and the mainstream industry it has been Goliath that has been winning. But that may be about to change. The message is starting to get out.

Retail Sales of A2 milk

A2 milk is currently on sale in Australia in about 1000 supermarkets. In USA it has just gone on sale in seven mid west States. In NZ it is difficult to obtain outside of Auckland.

Despite the low profile, there are about 500 NZ dairy farmers who have been quietly converting their herds over the last five to seven years by using only A2 semen. This has been an issue of risk management.

Typically it takes about two cow generations (about 10 years) to convert a typical NZ herd to A2.

By a remarkable coincidence most of our current top NZ bulls are A2. This level is much higher than in the cow herd.

Therefore our cow herds are drifting in that direction. But unfortunately it is not occurring anywhere near fast enough.

Farmers wanting to use only A2 semen can go about it several ways. One is to use nominated sires from either LIC or Ambreed (or another semen provider) that have been typed as A2A2. LIC and Ambreed know this status and with a bit of searching it can be found in the catalogues. Some of the smaller providers do not have this information. The second is to use the LIC ‘A2 pack’. The third way is to use LIC’s ‘bull of the day’ when this bull, or the backup, is A2, and then use frozen semen from the A2 pack when neither the bull of the day nor the backup are A2. Farmers wanting to use a mix of ‘bull of the day’ and the frozen A2 pack will of course need to make arrangement in advance. And don’t assume that your A1 technician will necessarily be informed as to the A2 status of particular bulls unless he or she knows in advance that this information is needed. Also, your

technician may not be agreeable to using the backup ‘bull of the day’ unless he or she has a good supply.

This year, for the 2007 mating season, 10 of the 11 Jersey bulls in the A2 ‘bull of the day’ team are pure A2. The other is A1A2. With the KiwiCross team five out of eight are A2 and the rest are A1 A2. For the Friesian team only six are A2A2, eight are A1A2 and one is A1A1. So farmers using Friesian semen will not make significant progress if they use only the bull of the day.

If farmers want to test their cows then there is a genetic test available using tail hairs. A typical NZ herd probably only has about 25% of the cows as A2A2 and perhaps 50% as A1A2. The A2 level may be somewhat higher in this year’s first calvers as the high level of A2 in the semen has been occurring for several years. Farmers who have a high level of Jersey bloodlines may also have a considerably higher A2 status.