Stuart Morrison has mixed feelings about the “view to die for” backdrop to his 279 hectare dairy farm on the outskirts of Rotorua. From the family homestead, nestled at the top of the Mamakus, there is a clear view of Lake Rotorua and Mokoia Island.

Picturesque though the lake setting may be, its very presence threatens the financial viability of some 24 dairy farms in the catchment area surrounding Lake Rotorua.

In a drive to “clean up” the lake, Bay Of Plenty Regional Council has set out to cap the losses of nutrients – particularly nitrogen and phosphate – from surrounding dairy farms. Known as “rule 11,” this has effectively capped production on those properties. Additionally, says Stuart Morrison, rates of $53 per hectare were originally proposed in what he terms a nutrient tax built around the principle that “the polluter pays.”

“The Regional Council has since pulled back from this, but I understand that it is still on the table”, he says. “Even $53 per hectare would equate to about $10,000 annually in rates for me, over and above the $12,000 in rates I pay to the local district council. It’s quite an impost. This comes on top of a rule which restricts my farm’s nutrient emissions to the levels for the three years ending June, 2004.” 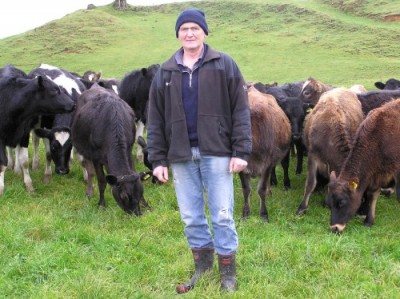 “The economics of my entire farming operation are under threat. Rule 11 does not have an immediate effect, but it is like saying that I can’t milk any more than the 450 cows which I am milking now, because it is the leaching of cattle urine into the soil which is said to be causing the problem.”

“The requirement to increase productivity and therefore production on the farm will continue to increase as the long term commodity prices are ratcheted down at 2% per annum.”

Such is the nature of Stuart and Heather Morrison’s dairy farm, that only 200 of the 283 hectares are farmable.

“It’s not easy country,” he says. “You would call it rolling, but at the same time, it’s sometimes difficult to find a flat paddock to harvest. Most of it can be covered by wheeled tractor, but there are a few bits which are too steep to drive a tractor on.”

“We farm the property as one block. We milk 450 mainly Jersey-cross cows in a 35 aside herringbone shed which is not very conveniently sited at one end of the farm. It is located where history has left it, and we have given thought to building a new shed. However, we have deferred any decision on this because of the uncertainty related to the environmental issues.” 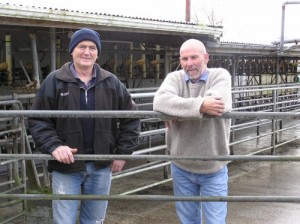 For the last four years, Stuart has grazed some of his yearling heifers off the farm – 40 this year – while retaining a further 60 to clean up some of the steep sidelings on the property. He is also able to compare those heifers grazed off the farm with those kept back.

“This year I picked the upper middle heifers to go with the New Zealand Grazing Company. These were generally animals which I thought could be worked harder, yet still do well.”

“I make strategic use of the heifers which I kept back. Because of the rolling topography, there are a lot of sidelings which the cows won’t eat unless you put a lot of pressure on them. By having some heifers at home, I am making better use of the grass which I grow on the farm. I use them in the rough areas and the areas furthest from the cowshed. The combination of cows and heifers suits this place.”

While the milking herd is predominantly Jersey, back-crossing to Holstein Friesians over the past two years has resulted in darker, slightly larger calves. Sending off the bigger and potentially better heifers, says Stuart, enables him to have control over the smaller animals.

“I like to feed my cows well, and the heifers which I retain get very well fed on the sidelings.”

Claiming that the Lake Rotorua issue could well be the precursor of an environmental protest which could extend into the Waikato, Lake Taupo and Taranaki areas, he said there was no compensation in the system for those farmers affected.

“Farmers are not compensated for the loss of income, loss of future income or future potential.”

“The properties of farmers affected are going to get to a point where they will possibly decrease in value.”

“With a farming operation, who is going to buy it when the production is limited? As Stuart says, when your costs are going up and your returns are going down, there is only one way to keep ahead of it and that’s to keep increasing your production. If you can’t do that, then you are in a real Catch 22 situation!”