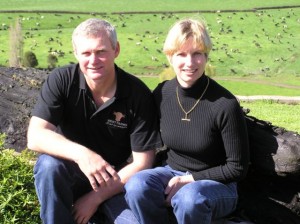 Married at 19, and hell bent on a farming career, Peter and Karen West, rank among the best in their profession. A plethora of awards – among them a Fonterra Westpac award for excellence – serve as testimony to the fact that the Wests have joined the top echelon of New Zealand’s dairy farmers. Nor are they newcomers to that elite band of award-winning performers. Back in 1995, Peter and Karen West were named Thames Valley dairy farmers of the year. Today, the Wests farm 420 Holstein-Friesian cows on their 160 hectare farm at Kaihere on the western foothills of the Hauraki Plains. Half of the property is peat to a depth of five metres; 40 hectares is hill country and the balance comprises rolling, heavy clay.

It’s all a far cry from their teenage years when Peter, whose parents owned a motor camp, began to help out on a dairy farm owned by Karen’s parents. Milking cows and dairy farm life in general, struck an immediate accord with the then 14-year-old town boy. Plans of joining the navy as a fitter and turner were soon abandoned in favour of a career in dairy farming.

“At 15, both Karen and I knew what we wanted and where we were headed,” says Peter.

“We had a goal. We could see people buying farms, going sharemilking and doing things. We were given a lot of encouragement, but did not receive any financial help from our families. We started out on wages, and even though they weren’t big wages, we saved 40%-50% of each wage and in three and a half years we had saved enough to go 50-50 sharemilking.”

“We had 200 cows, which Karen helped me milk before going to her banking job in Ngatea. In three years we had paid our loan off.”

The farm owner, recalls Peter, had planned to sell the property they were working on, so he and Karen offered to buy half of the farm and lease the other half.

“It turned out to be a good option for him as well as for us,” he says.

In the best traditions of the KISS (keep it simple, stupid) principle, the farm is used as a milking platform. 100 tonnes of maize silage is grown for the autumn, but essentially, an all grass system is adhered to. The farm’s best production is 131,000 kg milksolids.

Good private grazing for replacement dairy heifers is hard to find in the Hauraki Plains area, says Peter West. It is also a factor which 10 years ago persuaded him to place his weaner heifers with the New Zealand Grazing Company. Around 90-100 weaners leave the farm in annually in November-December, to be returned as in-calf heifers in 18 months.

“Every year we go through the process of looking at private graziers, but in our early years we got burned quite badly with poor stock,” he says.

“There are some good private graziers out there, but it is just the consistency of stock year in and year out, which makes us stick with New Zealand Grazing. With the number of cows which two of us have to milk, sending off the replacement heifers makes life nice and simple. I don’t have to be checking heifers or changing farms because stock have run out of grass. It’s all sorted.”

“We reckoned the margin between private grazing and the New Zealand Grazing Company to be 50 cents, per head, per week, which translated to $2500 per year, which we considered to be money well spent, and put it down as a management wage.”

Peter and Karen West have always been conscious goal setters, and go one step further than many, by writing those goals down. They believe that the results happen faster when there are time frames on them, and when they have been committed to paper. They are also dusted off and reviewed on a regular basis.

“The availability of land around here might mean that we may have to expand to two units to achieve this.”

“But we are enjoying what we are doing. We are enjoying the people who live around us. Dairying is an awesome industry to be involved with if you can see all of the positives. Too many people dwell on the negatives, but these occur in any industry.”

Fostering good relationships – be they with family, farm staff, or the community around them – have a high priority with Peter and Karen West. “We set personal goals of what we want to achieve, and a large part of this involves following our children around the country and watching them compete in hockey. “We are also very appreciative of the input of our only full time staff member, Denis Crookenden, who has been with us for five years making it possible for to leave the farm when we need to. “We are really lucky to have him here, but it is a reflection on the culture on the farm that we’ve got guys asking when Denis is going to leave because they want to come and work for us. It’s neat to be thought of in that way.”