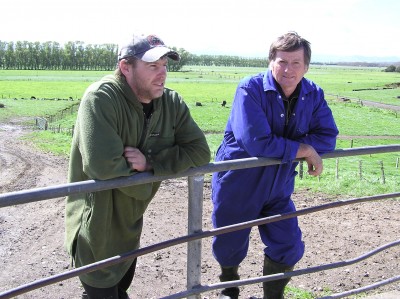 In dairy farming, as with most businesses, there is nothing like a dose of healthy competition for achieving results.

Take two keen young farm managers; give them similar-sized herds on adjacent farms, then watch them try to out-perform each other! Certainly this is a recipe which works for Maurice Eccles, who has divided his 171 hectare property at Kaihere, on the western foothills of the Hauraki Plains, into two farms.

A son, Philip Eccles, farms 250 mostly Holstein-Friesian cows on one block, while a second manager, Shane Gall, milks the same number of cows on the other block. Maurice’s role is largely confined to pasture management, overall supervision, calf rearing and relief milking.

After working his way through the sharemilking system, Maurice bought the original farm of 56 hectares 12 years ago. He added 15 hectares to this some years back, and last year bought a neighbouring 100 hectare property as a going concern. With a bit of re-jigging, two farms of equal size, if not equal soil types were created. “We now have two managers who are quite competitive, so that’s good!” says Maurice.

The two properties, however, are completely different both in terms of terrain and soil type.

The home farm (managed by Philip) is mainly peat, and the neighbouring property comprises 70% hill country, and gets a lot wetter than the peat country.

While the competition between the two farm managers is both real and on-going, when one or other property is short of feed, there is a lot of give and take.

“We run them as two units, but if one farm manager runs out of grass then he makes extra paddocks available for the other,” says Maurice.

“We have a very flexible boundary so that either manager can use some of the other’s paddocks if they need to. The hills come away a lot quicker in the spring than the peat.”

“It’s brilliant – it’s the best land you can get!” he enthused. “We turn it over every 10 years. It’s like farming a compost bin. As long as you keep feeding it, it keeps growing grass, and when it’s growing, it grows heaps. 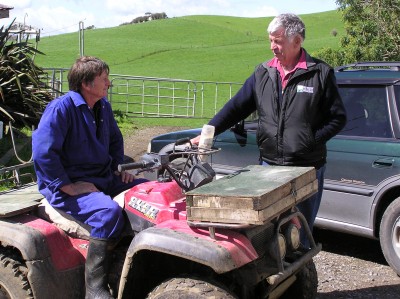 “We put on 10 tonne of lime per hectare when it’s turned over every 10 years. Each year, we sow 5% of the farm in turnips, and the other 5% is sown in grass. That way we get rid of the stumps and anything else which is in there, as well as level the paddocks. “We also buy in about 100 tonne of maize silage at the end of each season. If you buy it in you know what you are getting.”

The two farms are used as basically a milking platform – replacement dairy heifers are grazed off. Usually, the New Zealand Grazing Company takes 100 of their number as weaners in November, and returns them 18 months later in-calf as rising two-year-olds. “I do all of the calves here, so as soon as they are weaned, they’re gone.”

“Probably the best comparison that we have been able to make with New Zealand Grazing Company heifers, as opposed to heifers being grazed elsewhere, occurred last year. We bought the farm next door as a going concern, and the heifers were already out grazing so we left them there. With the heifers from the New Zealand Grazing Company, we had one which didn’t calve in the first three weeks, and another which was empty.”

While he has done the costings, it is the convenience factor which ranks uppermost with Maurice Eccles. “Of those with the private grazier, 60% of them calved in about three weeks, there were four empties and they were about a condition score lighter.”

In terms of cow numbers, Maurice Eccles has gone about as far as he wants to go, which suggests that future expansion will be minimal. “It’s coming to an end, I think,” he says.

“We wanted to get to 500 cows so that the farm would always be a viable unit. The original idea was to put in a rotary shed, put it all into one unit, and go from there.”

“But at the moment I have got two jokers who are both keen, so I wonder if that is the right way to go?”