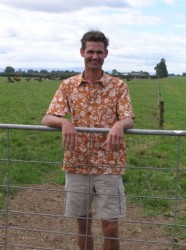 Kiwi concepts of “controlled starvation” don’t go down well with Waikato dairy farmer, Hans Geessink. Hans emigrated from the Netherlands 11 years ago, and today milks a 560 cow herd on a 134 hectare farm at Springdale, northwest of Te Aroha. Make no mistake about it. Those Holstein Friesian cross cows are their owner’s pride and joy, and are treated accordingly. They are fully fed the year round with a range of supplements which are largely determined by an Interlact consultant, who visits the farm on a regular basis. 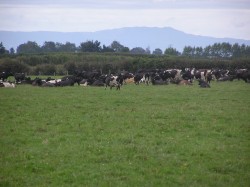 A production target of 280,000 kg milksolids has been set for the current season, but Hans expects that the final figure may possibly fall a little short of this, mainly because an additional 200 tonne of maize silage had been ordered, but could not be supplied. “This is a high input conversion,” explains Hans. “My ideal way of farming is what I am currently doing –fully feeding the cows – not old fashioned controlled starving. “This gives control. You don’t have control of the quality of the grass which grows on the farm throughout the year, but with a high input system you have complete control.

I like to fully feed my cows every single day of the year. It also gives optimum production and optimum health. Also, as a result of fully feeding my cows, my herd has a very low empty rate. Last season, it was 3.6%.” Hans Geessink was raised on a family farm in eastern Holland, close to the German border.

As an International Agricultural Exchange Association student he spent six months in New Zealand and seven months in the US. After attending an agricultural college in Holland, he farmed in partnership with his father and brother on the family dairy farm. “But there were too many captains on one ship,” he recalls of his decision to invest in a dairy farm in this country.

In 1995, with funds of his own, some family money and a bank loan, he bought a 68 hectare dairy farm.

“The previous owner had bought it as a slightly run-down property, and had made a number of very good decisions. He had done a lot of fencing, and was signed up to supply the Tatua Co-operative Dairy Company Ltd.”

“I had a good feeling about Tatua,” says Hans. “The company was already into niche markets, and whatever the future held in the event of a merger or a takeover, Tatua would be an attractive partner.”

In his first season on his new farm, an 18 hectare property across the road came on to the market, and with this added to the original holding, Hans started his second season with 240 cows. This increased in number to 280 by feeding a bit of maize silage at the end of the season.

Five years ago, a neighbouring 48 hectare farm came up for sale, and Hans again seized the opportunity and purchased it.

A manager was placed on the newly purchased property with a view to joining the two dairy farms the following season. The plan was to build a 50 bail rotary on the main farm, in preparation for the 2001-2002 season. Also on the building programme was a feed pad, two bunkers in which to store the maize silage and a second implement shed. It was also decided to invest in a mixer wagon.

The window of opportunity for doing all this was April and May of 2001, during which time two herds would have to be milked in a 14 aside farm dairy in readiness for a 7.30-7.45am tanker pickup.

It was a hectic two months, requiring 3am starts, but on the plus side, the $500,000 new rotary was ready on time.

Production has risen steadily over the 11 years Hans has farmed the property.

But the configuration of the existing farm could change yet again should any additional block of land come on to the market.

“Everything which we have done here is based on the possible purchase of extra land – but of course, it has to become available,” he says.

“The 50 bail rotary will be capable of milking the extra cows, and the feedpad can be extended. We can also extend the bunkers to allow us to store more maize silage.”

The fact that Hans was successful in a recent tender for the lease of a 64 hectare property to grow maize silage, adds further surety for the future. It will end his reliance on buying in the supplement.

“There is clearly a drainage problem with the property, but at this stage we are expecting it to yield 18-19 tonne per hectare, which will be sufficient for our needs and any surplus will be sold. After the maize silage has been harvested, we will grow Tama ryegrass, and it may be that we will graze some cows there in the winter and bring the Tama ryegrass over here in the spring.” 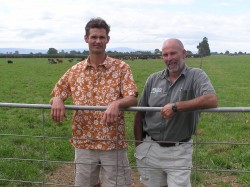 The professional, take no chances approach which Hans applies to herd management, extends also to his young stock.

“The land here is too valuable to raise my own young stock. I clearly want to see that my young stock are grazed well, which is the reason I leave it to other professionals,” he says.

“I send the weaners out at five months of age, and they are returned here, in-calf, as rising two-year-old heifers. I was happy with the performance of New Zealand Grazing before, and I’m confident I will be happy with them again.”

Furthermore, he says, dairy farm owners have got only themselves to blame!

Good employees should be well paid for their services, he claims, and should not have to milk in sub-standard farm dairies.

“Often the farm owner does not have to do the milking in an old fashioned farm dairy – nor do they have to do the drenching! I think it is in the best interests of farm owners to set up a unit which is enjoyable the whole year through.

“Employees should work reasonable hours. I accept that the calving season is busy with a certain amount of stress, but this can be minimised with the right facilities. The result will be that you will attract better people.”

And for those farm owners with entrenched ideas on how farm employees should be treated and paid, the news gets worse:-

“In five to 10 years’ time, I expect every employee in the dairy industry will have to be paid by the hour – just like outside the dairy industry. If a farm owner has a terribly run-down farm, then he will pay the price for all of the extra hours it takes employees to complete their work.”