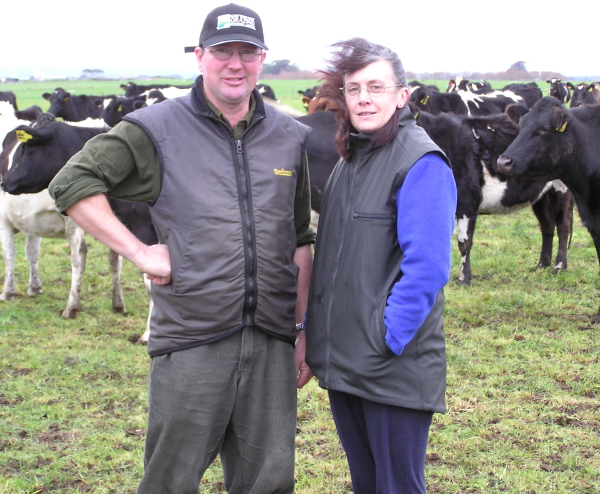 There’s a quality about Taranaki Sharemilker Of The Year finalists which makes them stand out from the ranks.

Gary and Sandra Fredrickson, who farm 480 cows for the Parininihi Ki Waitotara Corporation (PKW) on Glenn Road, Manaia, typify the qualities of those sharemilkers who are sufficiently skilled in their profession to aspire to this elite level of competition.

In their fourth year as 50-50 sharemilkers, and now in their third year on their current property, the Fredricksons contested the Taranaki Sharemilker competition three years in a row, finishing in fourth place in 2005. The experience has made the couple focus on their strengths and weaknesses and instilled a determination to enhance the one and eliminate the other. The term “motivated” understates their professional attitude towards farming. 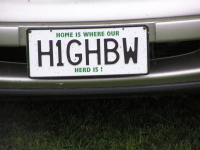 “We do a business plan every year, and have come up with a list of key point indicators which we think is relevant,” explains Gary.

The 143 effective hectare property farmed by the Fredricksons is similar in many ways to a dairy conversion block. PKW bought five neighbouring properties, and converted them into two.

“Everything was in the wrong place. The fences had to come out, the water reticulation system had to be replaced and our first year was spent sorting out all of that,” says Gary.

“Last year I really feel that we made a nice job of winding up the production, and this year we are looking to do better again.

Gary and Sandra Fredrickson formed their base herd four years ago when they bought 300 well recorded cows from their employer, the Trotter Estate.

“I think that the former Trotter herd had been Ab bred from year dot,” says Gary.

Gary and Sandra define a “correct” Holstein-Friesian cow as being deep set, with tidy udders, plus the capacity to eat well and covert dry matter to milksolids efficiently.

Care is taken in the mating programme to ensure that cows don’t get too big.

“We down-size the offspring by mating them with Jerseys,” says Gary.

“This year we have our first crop coming through where we replaced Jersey semen with Ayrshire semen. We feel that the Ayrshires have now reached a stage where their BWs are competitive enough to compete with Jerseys. The offspring is a lot smaller, shorter and is more uniform with the rest of the herd.”

There is also the potential, it is claimed, of hybrid vigour through the introduction of Ayrshire bloodlines.

“I think there is potential for hybrid vigour because we are using bulls which in some cases have been proven only over Ayrshire stock, where there is no room for hybrid vigour at all. However, if those same bulls are put over high genetic LIC cows there is a really strong chance of hybrid vigour.

“The bulk of our bulls come from the Livestock Improvement Corporation, but on the fringes there is Ambreed, Semex, and I have used a pedigree Ayrshire bull of my father’s (Sentinal Stud).

“The lowest 20%-25% of the herd on BW ranking go to high BW LIC bulls – there’s no negotiation there. Our very top cows go over the very top spectral types available – those types of bulls whose traits other than production lines are strong all the way down.

“What we are finding is that we are losing too many elite cows just because they are almost out-producing themselves. We are not interested in elite cows or in breeding a bull for the LIC team. We just want a strong BW herd with very little difference from our top heifer to our bottom heifers.

“We are after uniformity with our young stock coming through. I want to be able to look over all of our calves at weaning and see all of their backs!”

Supplements used over the past season take the form of 120 tonne of pit silage and 90 bales of haylage which were made on the farm, plus 170 tonne of maize and 100-120 tonne of palm kernel which is brought in.

“Last season we fed a palm kernel-maize mix in the spring, which was marvellous. I have never milked a quieter herd,” says Gary.

“Then we got to grass take-off date, dropped all of the supplements, and the herd became very agitated. Obviously the cows had been getting a really balanced diet through a nice protein balance, and then became very unsettled going into mating.

“This year, even after grass take-off date, we are still going to feed half rations of maize and palm kernel through mating because we now think that there is potentially a benefit from a balanced diet through that period.

“We are currently looking to rein in a high empty rate at the moment, due to not having a compact calving spread since going into a 480 cow operation. We have gone a long way towards achieving this for the coming season.

“We are currently only into our fourth day since the planned start of calving and already have 26% of the herd calved down, with a massive 40% of the 120 heifers calved down, including 9% in one day! The heifers were not synchronised.

“I am firmly convinced that it pays to place your heifers in the best of hands. This gives them ample time to clean up before mating and sets them up for the rest of their milking careers!”

The thoroughly professional approach of the Fredricksons to farming extends to every conceivable aspect of the total operation, and staff are no exception.

One full time assistant manager, plus a part time staff member who works full time in the spring and reverts back to milkings only after the spring are employed.

Every effort is made to ensure that staff work in a pleasant environment – one in which they are proud to work.

“We are in an environment in which staff are crucial for these bigger operations, and we go out of our way to make sure that they are catered for on every level. “We have a 50 aside herringbone farm dairy, and I invested $55,000 to install the latest cup removers just to make the working conditions a little more pleasant,” says Gary. 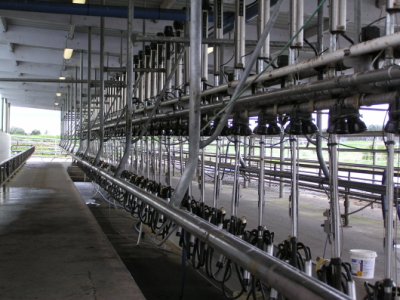 “We offer very good working hours. We just work three or four hour blocks in the winter, and in the summer, when we are milking, we don’t work past lunchtime. This gives us a couple of hours of down time, before we are back into milking again.

“What we find is that we compete heavily with other companies such as Yarrows or Mainland, where a four day on and four day off week is worked. We have got to come up with a product which is on a par with what those companies offer.”

Farm safety is another area in which strong emphasis is placed. Visitors to the property are greeted by safety signs at the farm gate and opposite the farm dairy. Nothing is left to chance – visitors, contractors and staff alike all have their attention drawn to the issue of safety.

Visitors to the property can pluck a map from a box which shows them where they are, plus a list of potential hazards and another of emergency numbers.

A separate guide sheet for contractors offers specific information on farm contour, where the wet areas are on the property, and what speeds should be travelled at when driving on cow races.

Farm staff are required to read hazard registers, and re-read them every three months, then sign to the effect that they have read them. Any accidents or near misses are entered in a register. 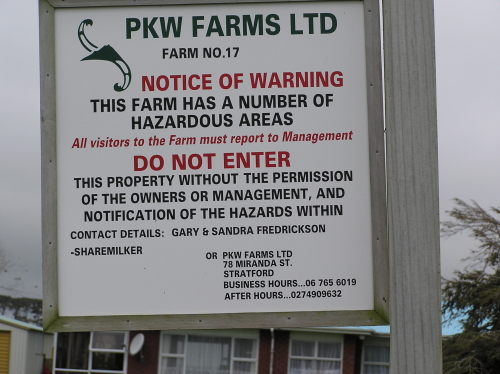 For Gary and Sandra Fredrickson, farm ownership is not seen as a goal in the medium term.

“I’d love farm ownership for the lifestyle – to do exactly what I want, when I want, how I want. But realistically, at this stage we are looking for an equity partnership which we can manage and drive. We are running this property at an elite level, and I am convinced that sharemilking has driven that. We are now in a pool of 10 other sharemilkers, and we all have our ‘key point indicators.’ These are all made transparent at the end of the year.”

“I am sure that if I was working on the family farm, with no disrespect for my parents, there is no way that we would be as cutting edge as we are now.”