Efficiency is a major driving factor at Enton Farms 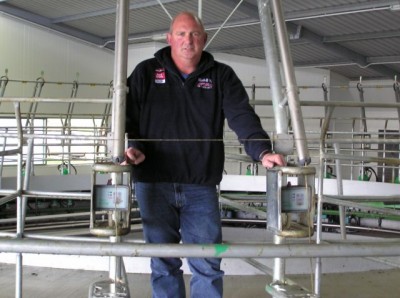 Over the last 18 months, North Waikato dairy farmer, Bill Millar, has made some momentous decisions. Foremost among these was to switch from winter milk supply to seasonal supply. That decision made, it was then resolved to invest $1.4m to build a state-of-the-art farm dairy; construct an underpass across a busy road in order to link two farms, build feed pads for 650 cows and install an effluent system to dispose of their waste. Bill Millar set up a family trust to administer “Enton Farms Ltd,” which is located in the Mangatangi district, 12 kilometres east of Pokeno.

The property comprises a milking platform of 267 hectares, plus an adjacent 65 hectare run off. The 650 cows are divided into two herds but are milked in one shed “ a 50 bail rotary, which has all of the bells and whistles, including full computerisation. The shed alone, cost more than $1m, but without it, future plans for expansion would not be possible. Next year it is planned to milk 800 to 850 cows, and over the next five years, the herd will expand to 1000 head. Everything in the farm dairy and on the farm itself has been installed or constructed with a view to accommodating 1000 cows at some future date.

It was the change in payment for winter milk which proved the catalyst for switching to spring calving and seasonal supply, says Bill Millar, in backgrounding events. “Basically, we don’t believe that the profitability is there for us in an area like this. It is not prime Waikato land where grass grows consistently all the year round. It is very summer dry,” he says.

“Therefore, we have done our budgets and after 18 years of supplying winter milk, we have gone back to a seasonal production base. We will go for an all summer milk programme and will use our run-off to produce grass for summer production.”

“The new dairy was totally viable from the point of view of the numbers which we are going to grow over the next few years. It would be totally impossible without this. We were at a point where we had come to stagnation in that we were milking through two old herringbones; we had too many people tied up with milking, and we were spending too many man hours a day doing this.”

“By putting an underpass under the road, a feed pad in, plus build a new dairy, it allowed us to link two farms together, plus lease another 52 hectares next door to us on a long-term lease. Without the dairy, we would never have been able to link all of the farms together and seize those other opportunities.”

A great deal of detailed planning preceded the investment in the new farm dairy, says Bill Millar. Of paramount importance was the fact that it had to meet future herd expansion plans without being added to.

“We settled for a 50 bail rotary, because we considered it the most efficient,” he says.

“We looked at 60’s and 70’s, and came to the conclusion that 50’s and 70’s were the only two options. We reasoned that a 60 bail would be less efficient in our situation because it would be too slow for two people, and too fast for one.

“From the pumps, right through, everything in the shed has been designed to the capacity of 1000 cows. We can go to that without changing anything. It is very high tech. Basically, we can operate it as a one man unit if we need to. Even if there are cows to be drafted out during milking, this can be done with only one person milking, because those animals can be pre-loaded into the computer the day before or a month before for that matter.”

Before the changeover from winter to seasonal supply, there were five staff working at “Enton Farms.” Four of these were pivotally involved in the dairy operation.

“They probably do fewer hours; they are a lot happier for it and they get through a lot more work.”

“Previously, we were spending 23 man hours per day in the milking operation. We have reduced that to seven!”

Efficiency is a major driving factor at “Enton Farms.” Per hectare and per cow production is constantly reviewed, and money saved in producing milksolids equates to extra production.

A move away from the very large bodied Holstein-Friesian cow has been a step in this direction.

“We are moving more towards the Kiwi-type Friesian and also to Kiwi-cross bulls,” says Bill Millar.

“We have been running pedigree Jersey bulls across our heifers for a few years now, and we have been getting very good results from those. We have had some of the resultant heifers in our herd for three or four years, and they are proving top animals.”

‘Kiwi-Cross’ J X F heifers and cows in NZ have average bodyweights of the average of their parent breeds. There is little positive heterosis (Hybrid vigour) for this trait. Conversely, they produce MORE milk-solid production per cow than BOTH their parent breeds. No wonder it makes this efficient cross a popular choice for NZ dairying.

It was the drive towards greater efficiency which persuaded Bill Millar to graze his replacement dairy heifers with the New Zealand Grazing Company. A first time customer, Bill says the move makes sound economic sense.

“What we want to try and do is to grow as much grass as possible on the farm for conversion to milk in the vat, because Fonterra only pays us for what it can extract from the vat. We use a considerable amount of feed each year in the rearing and replacement of young stock, not only in the form of grass but in the form of milk which would otherwise have been supplied to Fonterra as well.”

“Over the last two years we have taken into account how much feed we have been giving to replacement stock, which really had the potential of going into the vat, and we are now seeing it is more economical for us to have those animals grazing on land which we cannot grow milk off.”

“By sending stock to New Zealand Grazing, we can improve our cash flow by putting milk directly into the vat, and getting paid for it on the 20th of every month.”