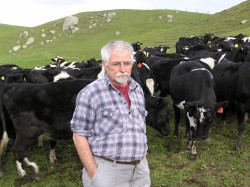 Waikato dairy farmer, David Morris, readily concedes that he has been relatively cautious in his approach to introducing new systems. Notwithstanding this, he has been prepared to invest more than $600,000 in upgrading facilities on the 165 hectare Culloty family farm, “Carreg Ellen” near Pukeatua, midway between Te Awamutu and Putaruru in the Waikato. Much of this has gone on the construction of a 44 bail rotary farm dairy, plus yards, roading and effluent disposal system. 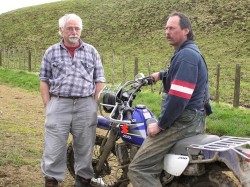 The property, which originally comprised two farms, has been in the Culloty family for almost 100 years.

“It was farmed fairly conservatively until about five years ago”, explained David. “It’s quite a varied property in terms of topography, with a mix of bush, flat, rolling and steep country. Of the flat land around 45 hectares is peat (eight hectares of which still needs further development). There is also a lake and an area of native bush, both of which are under QE 2 covenant.”

“Until 2001 there had been limited improvement work done. This had mainly focused on timber removal and the sowing of new pastures on some of the poorer peat land. Minimal urea was applied, and the same fertiliser mix was used on all areas every year.”

“As we made greater use of soil test results we have become much more targeted in our approach to fertiliser application.”

Five years ago, when the property was run as two farms, the combined production was around 100,000 kg milksolids.

As a result of the combined efforts of a very good sharemilker on one farm and David getting stuck in on the other, production since 2000 has increased to 160,000 kg milksolids.

In 2004, the two farms were amalgamated and “Carreg Ellen” was formed to run the farming business.

“Initially, production dropped, which was disappointing but not totally unexpected” says David.

“However, we identified what and where we needed to target to improve our performance both from a production and profitability point of view.”

“Carreg Ellen’s 475 cows are predominantly crossbreds with a few Holstein-Friesians and for the first time last year, yearling heifers were grazed off the farm.”

“It was inevitable that we had to graze off if we were going to increase cow numbers and improve the quality of heifers coming into the herd.”

“Originally, we went to New Zealand Grazing because we couldn’t find grazing for 65 of our yearling heifers elsewhere. The tendency around here is to graze heifers locally, but there was nowhere suitable available.” 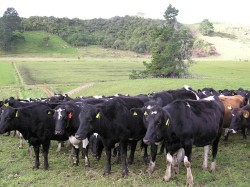 “We kept back a further 20 yearling heifers though, to graze an area of very steep ground not used for the milkers and while we needed stock to graze this, the heifers were still very well fed.”

“This also enabled me to make some sort of comparison with the heifers which went to the New Zealand Grazing Company – they were a sort of control herd, if you like, but the main objective was to have the best heifers possible coming into the herd for the 2006-2007 season”

“It would be fair to say that the heifers which went to the New Zealand Grazing Company were significantly ahead of those kept on the farm. However, there was no shortage of feed here, so there was no pressure either on the home mob either.”

“I have no concerns about the heifers grazed off – in fact I am very pleased with them. At an average 474 kg for the predominantly crossbred group at the end of April, I am quite certain that they will settle in with the milking herd, and produce well.”

In keeping with his cautious approach, David insisted on viewing the property where his heifers were to be grazed.

He was particularly impressed with Taylor and Jeffery White’s operation at Piripiri in the South Waikato, and insisted that was where his heifers should go. “I felt comfortable about the Whites – it felt right that they should look after our stock, and we were happy to let them get on with the job,” he says.

“That was May of last year, and those 65 heifers are back here now, and we are very happy with them. It didn’t hurt, either, that the heifers sent off the farm compared more than favourably with those retained to clean up the sidelings.”

Last Christmas, David’s confidence was expressed in a more tangible form when 80 weaners left the farm, again destined for Piripiri. This lot were less even in size, and will remain with the Whites until May next year.

“We still have another 35 left at home but may have to review this number as the year progresses,” he says.

Andy Church, who with his brother farms 170 cows on a nearby property, recently joined David as a 24% sharemilker. Both David and Andy are firm believers in feeding the cows to their potential and strategies are in place to lift production somewhere near the 430 kg milksolids per cow being averaged on the Church farm.

A target of 400 kg milksolids per cow has been set for the current season – a figure seen by both David and Andy as being achievable. “It’s really a question of feeding the cows economically, and this is where the quality replacement heifers come in,” says David. “There is no point in wasting feed on very average heifers after they have calved. We will definitely see some significant gains from the heifers compared to previous replacements.”

“As we place greater emphasis on feeding and animal health we need to ensure that we grow our heifers well from the very start.”

“During the winter we installed a meal feeding system in the rotary dairy. This was done to enable the milkers to be fed a more balanced diet. It also enables us to provide the required minerals either in the meal or in a separate pellet and it eliminates drenching at milking time.”

“The farm now has good facilities and soil fertility, and the goal now is to maximise the production from the current herd and gradually increase numbers as the remaining peat land improves.” “There is no doubt that we still have plenty of scope for improvement in our farming business. To achieve this, we have put together a team, both on farm and in the form of consultants who have the skills and expertise to make this happen.” 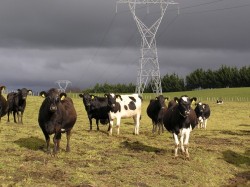 On current performance, the New Zealand Grazing Company will also continue to be part of this team effort.